The following clips were taken from a live concert featuring Jeff Scott that was broadcast on Orlando, FL area television.

Introduction & Variations On A Theme Of Mozart, Op.9- Fernando Sor

Let It Be- The Beatles 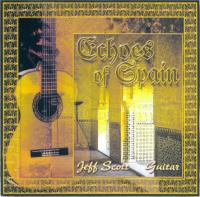 Brief notes about the composers and music

It’s likely Bach wrote his Cello Suites between 1717-23 when he was serving as Kapellmeister in Köthen, along with his other famous secular triumphs including the Brandenburg Concertos and the Well-Tempered Clavier. They are, without a doubt, some of the most emotionally intense pieces in the Batoque repertoire, making the most of the emotional depth of a solo cello and using a wide range of complex playing techniques.

There are six suites in all, each with six movements, each of which acts like a musical conversation – high passages are echoed by reflective low playing, and dense chords accompany delicate ornamental flourishes. The most famous movement, the ‘Prelude’ from Suite No. 1 in G, is a great example of Bach’s genius; there’s no accompaniment, but the harmony plays out note-by-note like a musical journey, as chords are implied over the course of a bar rather than played.

Introduction & Variations On A Theme Of Mozart, Op.9- Fernando Sor

Opus 9, The favourite air oh cara armonia from Mozart’s Opera II Flauto Magico.
Sor’s variations on a theme by Mozart is without doubt his best known piece, having enjoyed literally thousands of recordings and concert performances. It stands to reason that this popularity was boosted considerably by Andres Segovia’s inclusion of it in his repertoire, practically from his debut as a performer. The theme used by Sor is supposedly from the Finale chorus to Act I of the opera Die Zauberflote (The Magic Flute, KV 620), first performed in Vienna in 1791.

Fernando Sor / Josep Ferran Sorts i Muntades (baptized 14 February 1778 – died 10 July 1839) was a Spanish classical guitarist and composer. While he is best known for his guitar compositions, he also composed music for a wide range of genres, including opera, orchestra, string quartet, piano, voice, and ballet. His ballet score Cendrillon (Cinderella) received over one hundred performances. Sor’s works for guitar range from pieces for beginning players to advanced players such as Variations on a Theme of Mozart. Sor’s contemporaries considered him to be the best guitarist in the world, and his works for guitar have been widely played and reprinted since his death

Miguel Llobet (1878-1938), Barcelona, Spain. This is an arrangement of a popular Catalonian folk song by Miguel Llobet, who was one of FranciscoTarrega’s most distinguished pupils.

“Satin Doll” is a jazz standard written by Duke Ellington and Billy Strayhorn with lyrics byJohnny Mercer. Written in 1953, the song has been recorded countless times, by such artists as Ella Fitzgerald, Frank Sinatra, and many others. Its chord progression is well known for its unusual use of chords and opening with a ii-V-I turnaround.

Johnny Mercer was often asked to write lyrics to already popular songs. The lyrics to “Satin Doll” were written after the song was already a hit in its instrumental version. Ellington used “Satin Doll” as the closing number at most of his concerts.

“Take Five” is a jazz piece composed by Paul Desmond and performed by The Dave Brubeck Quartet on their 1959 album Time Out.  Recorded at Columbia Rcords’ 30th Street studio in New York City on July 1, 1959, it became an unlikely one-hit wonder two years later, and the biggest-selling jazz single of all time. “Take Five” has been included in numerous movies and television soundtracks, and still receives significant radio play. It was for several years during the early 1960s the theme music for the NBC Today program, the opening bars playing half a dozen times and more each day.