The JEFF SCOTT GROUP is a melodic hard rock power trio with an emphasis on musicianship. Led by singer/guitarist Jeff Scott, the rock group performs an impressive show consisting of melodic hard rock originals a cut above the average band. The live show also includes a solo classical guitar mini-set performed by Jeff. The songs, all written by Jeff, draw on classic, progressive, and melodic hard rock influences from groups such as Triumph, Rush, Deep Purple, Rainbow, DIO, Queen, YES, Scorpions, Michael Schenker Group, UFO, Yngwie Malmsteen, Dokken, and more, as well as being influenced by classical and jazz music. Formed in Cleveland, Ohio in 1993, the JEFF SCOTT GROUP has toured throughout the Northern, Eastern, and Southeastern US and is currently based in Orlando, Florida,

THE SONGS
ALL I WANNA DO IS PLAY MY GUITAR
CHANGE OF HEART
ENDLESS DAZE
HOW LONG
I BELIEVE IN LOVE
LET IT GO
LOUD AND CLEAR
NEVER GIVE UP, NEVER GIVE IN
WHEN THE LOVE IS GONE
WHEN THE SHOW IS OVER
WITHOUT YOU 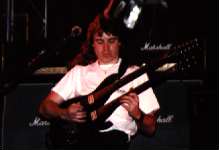